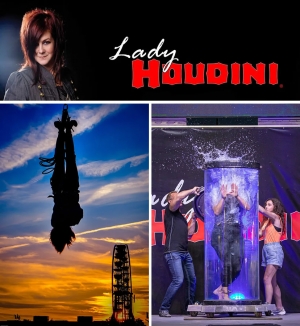 
Lady Houdini, the name given to Kristen Johnson by an Inside Edition producer at CBS Studios in New York has definitely stuck. Especially since she broke the immortal Harry Houdini's record for the most Water Torture Cell escapes ever performed, which historians and magic aficionados worldwide estimate to be just over one thousand. She broke Houdini’s record in 2012 as she has successfully performed her 1,001st public escape during the Georgia State Fair at the Atlanta Speedway. She is currently over 2,743 attempts and counting.

Kristen Johnson, considered to be the Houdini of the 21st century, almost seems fearless, even to the fault of flirting with death, as she has a knack for taking an ordinary magic escape and putting her signature brand on it. In the case of the Water Torture Cell, she decided to not hide the escape as Houdini and everyone since, but to perform it in full view which has drawn some criticism from purists. It’s a nail biter, watching her during the escape, as she is able to hold her breath under for up to 5 minutes and 2 seconds while methodically picking the padlocks, handcuffs, and leg shackles that hold her in what could quickly become a watery grave. Kristen's husband, Kevin Ridgeway, has been at her side for every escape, but is still horrified by the two times he witnessed her struggle before crowds of over 15,000 and 18,000 as she had to be removed from the water cell. Twice she suffered hypoxic seizures and blacked out, the third she could not pick the lock inside the lid. Johnson has only been denied the escape three times out of over 2,743 public attempts. Those three harrowing failed attempts prove the real dangers that exist in her profession.

Kristen, a real escapologist, has carved out a living, performing her daredevil brand of escapes around the world, live and on TV. When first asked to perform the aerial straitjacket escape which Houdini so often used to promote his theater shows, she said, ”sure, but in its original form is boring and anticlimactic for today’s audience." After all, Houdini escaped the jacket but not the circumstances that had him still hanging upside down in mid-air, of which he would have to be lowered back to the ground and released. Kristen says to completely a successfully escape, you not only have to remove the restraint, but also escape from the circumstance of being hung mid-air. In 2007, Kristen once again set out to ‘best’ Houdini’s escape and for over three years whether outside with a crane at 80 feet high or inside an arena at 40 feet above the stage and even in theaters, hung from battens, she would escape the jacket, remove her feet from the rope loops and rappel or fast rope down.

In 2011, Johnson pushed the envelope even further while performing her aerial escape for a group of over 5,000 seconds screaming fans at an arena in Texas. After escaping the jacket and removing her feet from the footloops, she just let go. Falling backwards, for what seemed to be an eternity, the crowd’s gasps and screams finally turned to cheers and a thunderous applause when she reappeared on stage and took a bow. What the audience didn’t see, hidden in the stage was a Hollywood stunt airbag. Kristen has now added this version of the escape to her repertoire, both indoors with a chain motor or outdoors with a crane, Johnson has once again taken a classical escape made famous by the world’s greatest known escape artist and completely rewritten the rules for the 21st century now making it harder for those who wish to follow in Houdini’s or shall we say Lady Houdini’s footsteps. 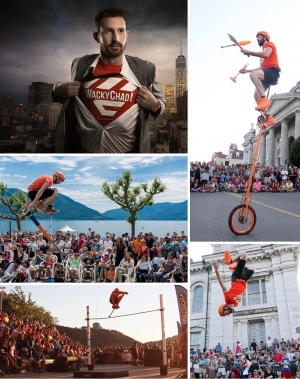 
Wacky Chad's award winning pogo stick skills, charmingly funny jokes and antics got him on America's Got Talent (Twice!), and a performance at the Superbowl.

For more than a decade, he has entertained thousands of crowds, from schools, fairs, festivals, theaters, colleges and universities all over the world. Prepare to be amazed, and if you don't like laughing, go somewhere else.


Various representatives from Hoopernova will be on hand all week, teaching Hula Hoop technique before their performances, including night glow hooping shows.  Fortunately, two of the best hoopers in the world are from the Cleveland area: Stee Bax and Angelina Rose (performing in the video below).  You will be amazed what each can do with a hula hoop.

Stee Bax is based out of Solon, Ohio, she has performed at professional sporting events, live concerts, conventions, in music videos, photo shoots, and more. She performs single hoop dances with fire, LED, and day-taped hoops. Additionally, Stee Bax hosts fitness demonstrations on Hula Hooping, so if you're looking for a good way to work off those elephant ears, look no further.

Angelina Rose has spread her own unique combination of dance and light painting throughout the Great Lakes region and beyond. In between her world travels, she teaches children of all ages Hoop Dance at a local Parma studio. Find out more at the Hula Hoop lessons that will be at the Cuyahoga County fair this year! 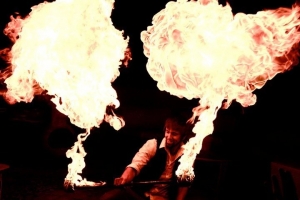 
Dangerous objects! Perilous stunts! Feats of strength and balance! Jason D’Vaude, self-taught one-man multiple-adjectived circus sensation, brings his comedic juggling, fire, and clowning shows to audiences around the world, delighting them with his charming humor and distinct but refined awkwardness. After seeing Jason  juggle sharp objects, climb up precariously-balanced objects, ride an extra-tall unicycle, or manipulate fire like a master, audiences are left speechless except to say “that was AWESOME!” 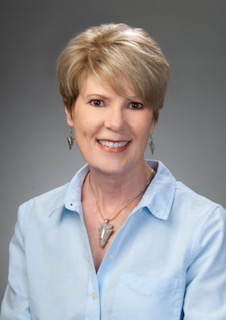 
The Cuyahoga County Fair is honored to host Ohio Department of Agriculture Director, Dorothy Pelanda, who will be visiting us on Friday, August 13th. She is expected to begin her tour of the 2021 Cuyahoga County Fair at noon by checking out the 4-H Large Animal Evaluation and Showmanship exhibition in the Cow Palace. Shortly before she departs, Director Pelanda is expected to present a personalize banner for our Fair.

Dorothy Pelanda was sworn in as the 39th Director of the Ohio Department of Agriculture by Governor Mike DeWine on January 14, 2019. Pelanda is the first woman to serve as Director in the Department’s history. Her great-great uncle, Gideon Liggett, served eight years (six as treasurer) on the Ohio Board of Agriculture (the precursor to ODA) in the early 1900s.

Pelanda has called Ohio home all her life. She grew up on her family farm in Marysville, where the values of hard work, steadfast determination, resourcefulness and eternal optimism were instilled in her at a young age. Pelanda still lives on the farmland where she was raised.

A graduate of Marysville High School, Miami University, and the University of Akron School of Law, Pelanda recognizes the value of education in pursuing one’s dreams and has fought to provide opportunities to young Ohioans to achieve their own.

As a small business owner, Pelanda understands that government regulation and bureaucratic red tape must be limited to allow Ohio’s business owners to thrive and prosper. Pelanda practiced law in her own private practice for nearly 30 years, where she represented hundreds of clients from Union County and the surrounding area.

Pelanda’s legislative work has earned her a multitude of endorsements, including the Ohio Farm Bureau, the American Conservative Union, the National Rifle Association, the Ohio Chamber of Commerce, the Ohio Manufacturers Association and the National Federation of Independent Businesses.

Pelanda is married to Sam Gerhardstein and has three adult children.

Food and agriculture is the No. 1 industry in Ohio, adding more than $124 billion to the economy each year. In addition to providing leadership for the agricultural industry, the Director of Agriculture administers numerous regulatory, food safety, and consumer protection programs for the benefit of all Ohioans. 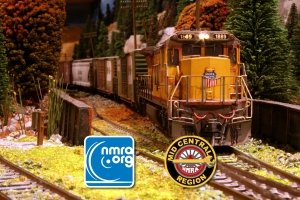 Where: Home & Hobby Building
When: All Week
Web: nmra.org


The National Model Railroad Association, a 501(c)(3) not for profit educational organization, was founded at the first National Convention over Labor Day Weekend, 1935. The initial goal was to develop standards for scale model railroad equipment to facilitate interchangeability and operation of equipment between modelers, clubs and others.

Today, the NMRA is a world wide organization, with over 18,000 active members, associates, families and clubs dedicated to the hobby of scale model railroading in all it's facets, supporting a hobby of many diverse interests that all relate to the greater world of trains and railroads. 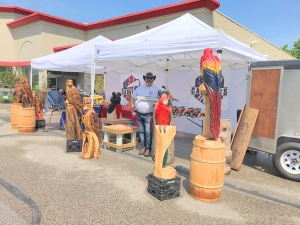 Where: South Midway
When: All Week
Web: facebook.com/pg/woodcarvingsbychris/


After 34 years fabricating and carving natural stone, Chris is applying his experience to a new medium with new tools - logs and a big ole chainsaw. 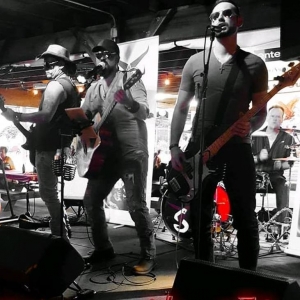 
Yosemite Slim is quickly becoming one of NE Ohio’s most popular MODERN COUNTRY cover bands.  Not only for music selection, but also musicianship and their live stage show. Being so versatile is key for Slim, they can play small patio’s with down sized percussion at conversation volume and then play a large stage at a major venue with full PA and drums.  Yosemite Slim NEVER plays to a click track, they are live live LIVE! including their precision harmonies. 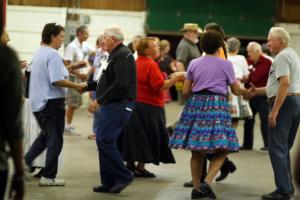 
Come on out to the fairgrounds, swing your partner and do-si-do, cause it's time for a little modern western square dancing.  Feeling timid?  Don't be!  Whether you've been square dancing all your life, or just had a fun experience in gym class, all are welcome to join in the fun.