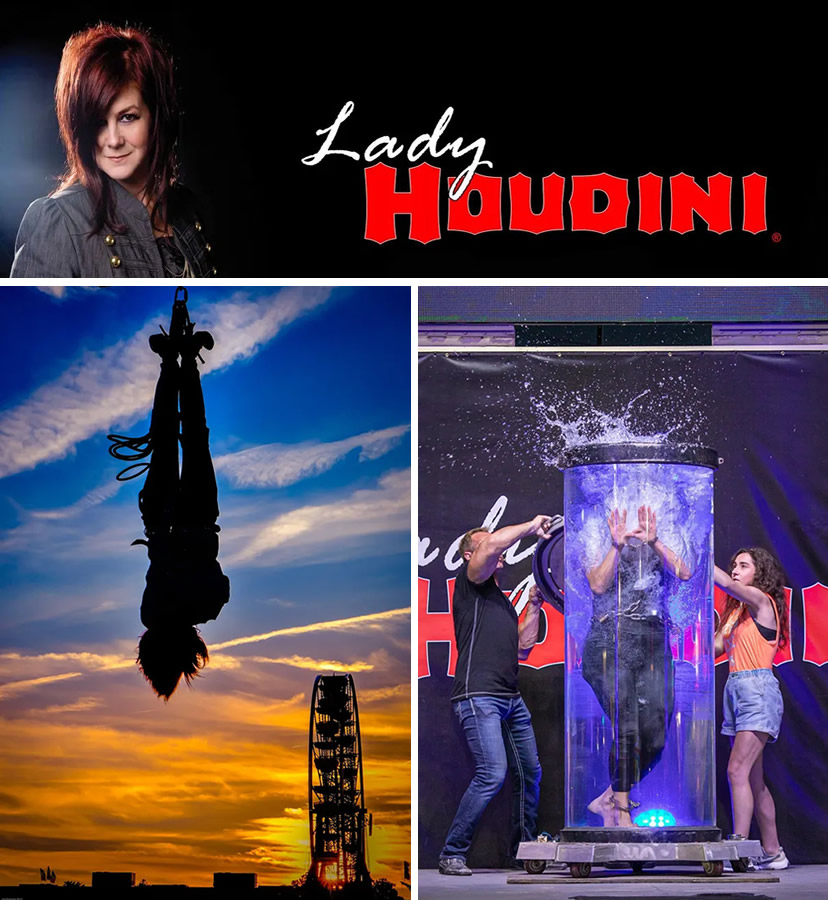 Lady Houdini, the name given to Kristen Johnson by an Inside Edition producer at CBS Studios in New York has definitely stuck. Especially since she broke the immortal Harry Houdini's record for the most Water Torture Cell escapes ever performed, which historians and magic aficionados worldwide estimate to be just over one thousand. She broke Houdini’s record in 2012 as she has successfully performed her 1,001st public escape during the Georgia State Fair at the Atlanta Speedway. She is currently over 2,743 attempts and counting.

Kristen Johnson, considered to be the Houdini of the 21st century, almost seems fearless, even to the fault of flirting with death, as she has a knack for taking an ordinary magic escape and putting her signature brand on it. In the case of the Water Torture Cell, she decided to not hide the escape as Houdini and everyone since, but to perform it in full view which has drawn some criticism from purists. It’s a nail biter, watching her during the escape, as she is able to hold her breath under for up to 5 minutes and 2 seconds while methodically picking the padlocks, handcuffs, and leg shackles that hold her in what could quickly become a watery grave. Kristen's husband, Kevin Ridgeway, has been at her side for every escape, but is still horrified by the two times he witnessed her struggle before crowds of over 15,000 and 18,000 as she had to be removed from the water cell. Twice she suffered hypoxic seizures and blacked out, the third she could not pick the lock inside the lid. Johnson has only been denied the escape three times out of over 2,743 public attempts. Those three harrowing failed attempts prove the real dangers that exist in her profession.

Kristen, a real escapologist, has carved out a living, performing her daredevil brand of escapes around the world, live and on TV. When first asked to perform the aerial straitjacket escape which Houdini so often used to promote his theater shows, she said, ”sure, but in its original form is boring and anticlimactic for today’s audience." After all, Houdini escaped the jacket but not the circumstances that had him still hanging upside down in mid-air, of which he would have to be lowered back to the ground and released. Kristen says to completely a successfully escape, you not only have to remove the restraint, but also escape from the circumstance of being hung mid-air. In 2007, Kristen once again set out to ‘best’ Houdini’s escape and for over three years whether outside with a crane at 80 feet high or inside an arena at 40 feet above the stage and even in theaters, hung from battens, she would escape the jacket, remove her feet from the rope loops and rappel or fast rope down.

In 2011, Johnson pushed the envelope even further while performing her aerial escape for a group of over 5,000 seconds screaming fans at an arena in Texas. After escaping the jacket and removing her feet from the footloops, she just let go. Falling backwards, for what seemed to be an eternity, the crowd’s gasps and screams finally turned to cheers and a thunderous applause when she reappeared on stage and took a bow. What the audience didn’t see, hidden in the stage was a Hollywood stunt airbag. Kristen has now added this version of the escape to her repertoire, both indoors with a chain motor or outdoors with a crane, Johnson has once again taken a classical escape made famous by the world’s greatest known escape artist and completely rewritten the rules for the 21st century now making it harder for those who wish to follow in Houdini’s or shall we say Lady Houdini’s footsteps.